The Finale of the Series, Pathway to the Stars: Parts 7 – 12 Released!


Papillion, NE, Dec 20, 2019 -- "To be worthy to journey the stars, conditions must be such that if a group of explorers were to return home many millennia later, humanity will not have faded away into nothing. Instead, they will have preserved the homeworld and home solar system, and even improved upon the beauty, the abundance, and the ability of longevity of life in every way that is positive and possible."
~ Eliza Williams 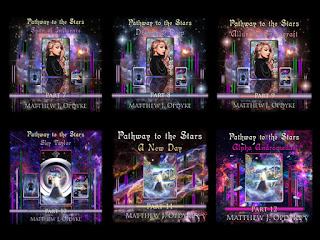 Part 7, Span of Influence, focuses on protagonist Eliza Williams in her quest to understand the economic environment so she can grow her influence on Earth and help people to become engaged in pursuits that bring purpose, validation, and meaning to their efforts.

Part 8, Dreamy & Deep, centers on two characters that Eliza Williams recruits, Najem Grace and Joanne Gallant. Najem is Vesha Celeste's best friend waiting to see her come back to life. Joanne is an award-winning musician who seeks to understand more regarding her Universe.

Part 9, Allure & Spacecraft, shows how Vesha Celeste embraces her new reality in the real world. Eliza commissions her to build thirteen large-city-sized spacecraft above the Kuiper belt and north pole of Pluto.

Part 10, Sky Taylor, introduces us to a new superhero made from Vesha's DNA and neurology. Sky was a figment of Vesha's imagination throughout her life. Now, as a reward for Vesha's love of humanity from birth to the day she passed away, Eliza has commissioned her Pathway organization to bring Sky to life. As Sky heals rather than harms, we meet Shayeena Arezo, Ariel Boshka, and Laetitia Zemani.

Part 11, A New Day, revisits a matter that weighed on Joanne for years. Since her recruitment, she has become Pathway's vice president and close friends with Erin Carter. Sky takes Erin along with her and helps Joanne find out who her brother's murderer was to seek justice. We also learn of the results of Eliza Williams' run as President of the United States with Yesha Alevtina as her running mate.

Part 12, Alpha Andromedae, reveals to us that after several years of preparations, humanity is ready to journey through the Cosmos. Eliza has helped humanity to become the type of civilization that preserves life, beautifies it, and increases longevity as well as clarity of mind. Now the twelve zones of the Intergalactic Mission Contingency are ready to make their first jump into deep space.

Venture into the lives of each character as they pursue their dreams and progress closer to achieving the seemingly impossible!