Also sold will be a Hugo Lonitz figural bird jardiniere, a Lake Breeze Hot Air Fan and two Lionel locomotives. The sale will be held online and at the gallery in Cranston, R.I.

Cranston, RI, USA, Jan 25, 2020 -- Bruneau & Co.’s next major auction, slated for Saturday, February 15, will be a two-session affair, with bidding available online and in the Cranston gallery at 63 Fourth Avenue. Session 1, beginning promptly at 10 am Eastern time, will feature an important single-owner collection of steam engines, cast-iron and other pre-World War II toys and other items. 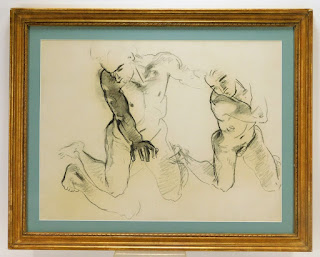 Session 2, starting at 12:30 pm, will feature Bruneau & Co.’s normal mix of antiques, fine art, decorative arts, silver and more, to include an outstanding collection of English, German and French Majolica; a collection of four Russian icons and a silver and gilt copper crucifix from the St. Peter’s and St. Andrew’s Episcopal Church in Providence, R.I. All are 19th century or earlier.

“Handling the single-owner collection of steam engines and early mechanical toys in Session 1 brings me back to my days as a machinist,” remarked Kevin Bruneau, president of Bruneau & Co. Auctioneers. “It’s certainly one of the most interesting collections we have handled in some time. I will be curious to see where the market is in 2020.”

Highlight lots in Session 1 promise to include a pair of Lionel Mojave locomotive engines, with a pre-sale estimate of $400-$600; and a Lake Breeze Hot Air steam engine fan, expected to make $800-$1,200. Lionel, LLC was founded in Michigan in 1900 and is an American designer and importer of toy trains and model railroads. The company is headquartered now in Concord, N.C.

The Lake Breeze Hot Air Fan runs not on electricity but rather uses hot air created by a kerosene burner to power it. The engine is known as a Stirling Cycle Engine (named after its inventor in the 1800's). Lake Breeze fans were introduced in 1919 as a precursor to the electric fan. The firm made several models, floor models and table models. Today they’re highly desired by collectors.

On to Session 2, where Travis Landry, a Bruneau & Co. specialist and auctioneer, said, “The fine art offerings in this sale really get my heart pumping. From a contemporary Jeff Koons balloon dog to a charcoal study by one of the greatest American artists John Singer Sargent, there is certain to be heavy collector interest. It should be a lot of fun hammering down this auction.”

The Jeff Koons porcelain blue balloon dog still in the original box should fetch $6,000-$9,000. Koons, born in 1955, is an American artist recognized for his work dealing with popular culture. His sculptures depicting everyday objects, including balloon animals, are made from stainless steel with mirror-finish surfaces. He lives and works in both New York City as well as York, Pa.

Last May, Koons made headlines when a shiny stainless-steel rabbit sculpture created by him in 1986, inspired by a child’s inflatable toy, sold at Christie’s for $91.1 million with fees, breaking the record at auction for a work by a living artist, set the previous November by David Hockney.

The John Singer Sargent (Italian/British/American, 1856-1925) figure study charcoal drawing of Moloch for the Boston Public Library, originally purchased from Sotheby’s, is expected to hit $10,000-$15,000. Moloch is the biblical name of a Canaanite god associated with child sacrifice.

Sargent was an American expatriate artist, considered the leading portrait painter of his time. His works depicted Edwardian-era luxury. He created roughly 900 oil paintings and more than 2,000 watercolors, as well as countless sketches and charcoal drawings. Sargent’s oeuvre documents worldwide travel from Venice to the Tyrol, Corfu, the Middle East, Montana, Maine and Florida.

An oil on canvas painting by James Brade Sword (Pa., 1839-1915), depicting Long Pond on Martha’s Vineyard, Mass., framed, has a pre-sale estimate of $3,000-$5,000. Sword is known for genre, landscape, portrait and children renderings. He went to the Pennsylvania Academy of the Fine Arts in Philadelphia and studied with George W. Nicholson, a respected landscape painter.

An oil on canvas landscape painting by Charles Gordon Harris (R.I., 1891-1963) should finish at $800-$1,200. Harris is known for his landscapes and coastal views. He studied at the Rhode Island School of Design and was a member of the Providence Art Club, the Providence Watercolor Club and the South County Art Association.  He exhibited at all three and elsewhere.

A Hugo Lonitz figural bird jardiniere is expected to bring $800-$1,200. Hugo Lonitz was a prominent majolica manufacturer who operated out of a factory in Neuhaldensleben, Germany from 1868-1904. Lonitz produced tableware, household utilities and small collectibles, but his factory is best known for its production of naturalistic majolica pieces in lifelike size and detail.

Online bidding will be offered by LiveAuctioneers.com, Invaluable.com, Bidsquare.com and bidLIVE.Bruneauandco.com, plus the mobile app “Bruneau & Co.” on iTunes or GooglePlay. Phone and absentee bids will also be accepted. To bid by phone, the number is 401-533-9980.