In 1993, Millis native Joe D’Eramo co-wrote and self-published Recipes for the Roommate-Impaired: A Comical Look at Eating and Living with People as a paperback.

Millis, MA, Jan 26, 2020 -- In 1993, Millis native Joe D’Eramo co-wrote and self-published Recipes for the Roommate-Impaired: A Comical Look at Eating and Living with People as a paperback. In the spirit of the reboot of Beverly Hills 90210 last summer, D’Eramo decided to put it out as a Kindle book. 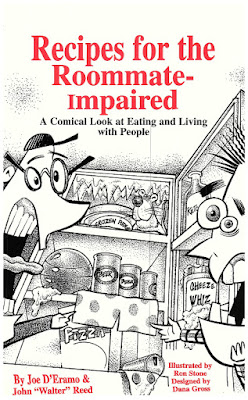 “Well, even after all this time, the recipes are damn good—the meatloaf, mac and cheese and tuna noodle casserole are to die for; best BBQ recipe out there, too. Second, and more importantly, I got tired of looking up the pages in the paperback, placing it down on the counter, repeat…. you get the idea. So, I went for it and it’s now available as a Kindle on Amazon,” said D’Eramo, a freelance copywriter and marketing and PR consultant.

“The world, just like John and I, has changed dramatically since we put out the book way back when,” said D’Eramo. “We both got married and had children and John has gone on to do some great things with his culinary consulting practice in the greater Chicago area.”

The new Kindle version include updated and editor’s notes where things get a little uncomfortable.

“People’s sense of humor is not quite the same as 1993 and we needed to edit things a bit for today’s reader,” said D’Eramo.
Recipes for the Roommate-Impaired teaches readers how to: Create very edible meals on a limited budget with minimal supplies; improvise for those times when your roommie has gone on a binge; impress overnight (ahem) guests with your other talent; and more. Along the way, Recipes for the Roommate-Impaired lampoons the many oddities and consistencies that make the roommate experience so darn interesting. This includes such sections as: What to Make While Watching the Brady Bunch; What You Should Do With Your Chicken; Things That Grow in Your Bathroom That You Can Eat; For Better or (Liver)wurst; and more. It’s a regular smorgasbord of entertainment and information packed into the most unlikely of places: a cookbook.

The reboot version of Recipes for the Roommate-Impaired is sold on Amazon at a special introductory price of $2.99.
“We’re not going to keep it at that price for long,” said D’Eramo. “But for $2.99 you can get the world’s best meatloaf recipe, put it on your smartphone or tablet, and never had to dog ear a page.”

For more information about Recipes for the Roommate-Impaired, visit https://amzn.to/2jQ2ViN.