The Ten Cate work, a fine example of Dutch Impressionism, sold for $4,688. Bearden’s jazz-themed lithograph brought $2,125. They were the two top lots in the 344-lot auction. 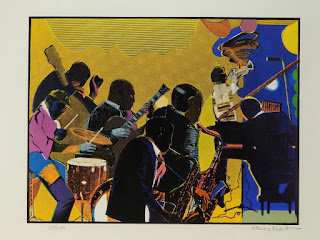 “The Siebe Johannes Ten Cate painting was the surprise of the day,” said Travis Landry, a Bruneau & Co. auctioneer and the firm’s Director of Pop Culture. “We knew the subject matter was strong for the artist but recent records had been depressed. This certainly shows the market is there for good imagery.” The painting was the top earner of the 344 lots that came up for bid.

The work, a fine example of Dutch Impressionism, depicted a fisherman on the bank of a river outside a city beneath a bright blue sky. It was housed in the original period carved wood frame that still had an old exhibition label on recto. The board was 10 ½ inches by 13 ¾ inches; the frame was 18 ½ inches by 21 ¼ inches. The painting was signed and dated “Ten Cate 1903”.

Although Dutch by birth, Siebe Johannes Ten Cate spent most of his working life in France. Van Gogh was an acquaintance; he once described Ten Cate as "a very neat man, completely dressed in black cloth, and not at all like a typical poor artist.” His favorite subjects were landscapes, city and harbor views. Le Havre was one of his favorite locations. He also made some etchings and lithographs. He was revered in France but, remarkably, was mostly neglected in the Netherlands.

The Romare Howard Bearden lithograph – a Modernist depiction of an African American jazz band – was edition #129 of 200 on Arches paper measuring 22 inches by 29 ¾ inches. The frame was 26 ½ inches by 34 inches. The work was artist signed “Romare Bearden” lower right and numbered (“129/200”) lower left. Works by the artist are highly sought after by art collectors.

Romare Bearden was an artist, author and songwriter. He worked with many types of media, including cartoons, oils and collages. The New York Times described Bearden as "the nation's foremost collagist" in his 1988 obituary. Bearden became a founding member of the Harlem-based art group known as The Spiral, formed to discuss the responsibility of the African-American artist in the Civil Rights movement. He also co-wrote the jazz classic, Sea Breeze.

“It was nice being able to have the live crowd back in the gallery,” Bruneau & Co. president Kevin Bruneau said of the auction, the first in a few months that permitted actual live bidding. Recent sales were online-only, because of COVID-19. “Everyone stayed safe and socially distant wearing PPE,” he said. “Bidding was strong in the room and online. It was a good day overall.”

Internet bidding was facilitated by LiveAuctioneers.com, Invaluable.com, Bidsquare.com and bidLIVE.Bruneauandco.com, plus the mobile app “Bruneau & Co.” on iTunes or GooglePlay. Following are additional highlights from the auction. All prices include the buyer’s premium.

Robinson Murray earned a degree in Studio Art from Harvard University in 1912 and quickly pursued a career in commercial art. This continued up to his retirement in 1960, when he turned his focus to modern abstract art. From 1960 to 1980, Murray exhibited at the John F. Kennedy Building in Boston and the Copley Society within Boston City Hall.

An Abraham Lincoln political campaign ferrotype or tintype (photograph made by creating a direct positive on a thin sheet of metal), from around 1860 and depicting a clean-shaven Lincoln in a circular format, surrounded by a chased brass frame on tin mount and pin, in overall good condition, went for $1,625. The pin was just shy of one inch by two inches.

A 14kt gold braided rope heart bracelet, made in America circa 1960 and weighing 45.4 grams, made $1,625. The 7 ½ inch long multi-twist linked bracelet with heart detailing had a patent number matching a 1960 patent filed by inventor Simon Geldwerth. Minor scratches to the clasp and one heart charm with a minor scratch were its only blemishes.

Bruneau & Co. Auctioneers is always accepting quality consignments for future auctions, with commissions as low as zero percent. Now would be a perfect time to clean out your attic. To contact Bruneau & Co. Auctioneers about consigning a single piece or an entire collection, you may send an e-mail to info@bruneauandco.com. Or, you can phone them at (401) 533-9980.

About Bruneau & Co. Auctioneers:
Established in 2015 by owner Kevin Bruneau, Bruneau & Co. Auctioneers is an energetic and young auction house built on the backbone of over fifty years of combined experience in the antiques and auction world. Bruneau & Co. believes in bridging the gap between antique and contemporary utilizing modern day methods to market history in a fast-paced, ever-changing world. We take pride in orchestrating specialty and single owner catalogs giving proper and factual representation of any and all “cool” items of value. As a multifaceted company our expertise goes beyond the traditional antique; we follow market trends and bring to light what the public calls for. From its beginning, Bruneau & Co. has been partnered with Altered Reality Entertainment, parent company of Rhode Island Comic Con in organizing toy, comic, and collectible auctions bringing Pop Culture to a live auction environment. Our focus on emerging markets extends to contemporary and urban art, modern design, and Asian arts. To learn more, visit www.bruneauandco.com.